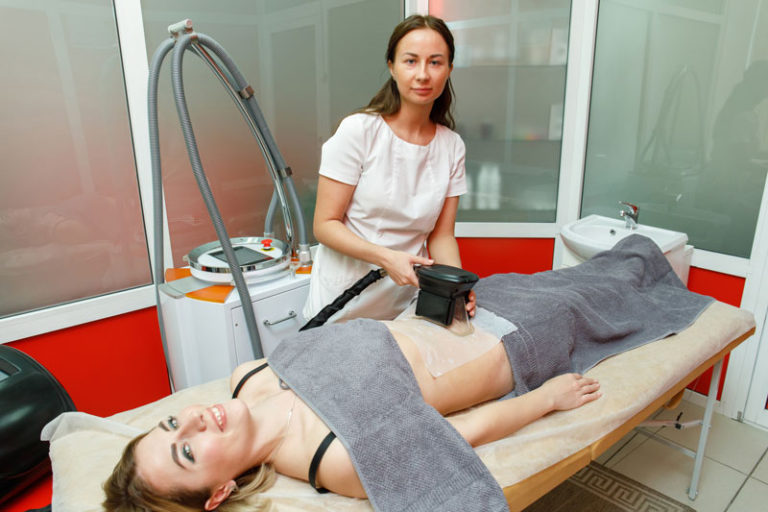 That’s what we’re going to address today, adding another competitor to the mix and this is Trusculpt iD.

However, we are going to refer to CoolSculpting, SculptSure, and Trusculpt in-depth, going into why some of them may be more effective than others.

Let’s describe what all of these technologies are trying to achieve.

There are maximally invasive procedures or standard surgical procedures, and these are things like Tummy Tucks, or Abdominoplasty, Arm Lift or Brachioplasty, Thigh Lift, or Thighplasty.

These are operations that have true cutting or big excisions, and tissue is directly removed and tightened, and that’s how surgeons change the shape of the body for those procedures.

Noninvasive body contouring procedures, CoolSculpting, SculptSure, and Trusculpt iD, all these procedures have in common the goal of removing excess fat.

There is another kind of noninvasive body contouring procedure that is in a different category from that is called Emsculpt, and whereas the other technologies aim to remove fat without surgery Emsculpt has the goal of building muscle without surgery, and it does this using high intensity focused electromagnetic energy to trigger extra strong muscle contractions to the tune of 20000 of these in a half-hour, and as a happy side effect of Emsculpt doctors have found that it dissolves fat, but the fat removal with Emsculpt doesn’t compare with the non-invasive fat removal that specialists get with some of these other devices.

Emsculpt is intended to build muscle and the focus of these other 3 devices that we’re focusing on here is to remove fat.

Let’s divide these minimally invasive fat removal procedures into 2 categories based on how they are achieving fat removal.

The first category is Cryolipolysis.

Cryolipolysis is the process by which fat cells are destroyed by exposing them to extremely cold temperatures, and the only device that fits into this category of the three that are discussed here is CoolSculpting.

The other two devices, the SculptSure and the Trusculpt iD fall into the category of devices that cause fat cell destruction through heat, so essentially by either using cold in the case of CoolSculpting or heat in the case of SculptSure and Trusculpt, specialists are bringing fat cells to the point that they trigger cellular self-destruction in a process called apoptosis, so different means of arguably achieving the same results.

Some research can demonstrate the clinical efficacy or effectiveness of CoolSculpting, SculptSure, and Trusculpt.

CoolSculpting as far as noninvasive body contouring procedures go is much more effective than either SculptSure or Trusculpt.

It comes down to a fairly straightforward observation which is that all three of these procedures need to be performed according to a very precise protocol to achieve the desired results, more specifically they need to be performed for a given it duration of time and the tissues need to be exposed to a very specific temperature to get the results that the manufacturer is promising.

CoolSculpting does have an advantage here because while in the beginning CoolSculpting can be a little uncomfortable as the tissues are brought down to temperature, once they get to the extreme cold temperatures necessary to cause Cryolipolysis with fat cell death due to cold temperatures, numbness sets in. The same principle that applies in everyday life applies here. If you grab an ice cube with your hand or stick your leg in the snow for an extended period, it’s going to become numb, so while it may be painful at first eventually you’ll have no. No discomfort at all.

These patients that are undergoing CoolSculpting treatments may have some initial discomfort. Once the device gets down to the temperature at which it needs to reach to cause the death of fat cells there isn’t generally more discomfort. The patient can sit there pretty easily and go through the entire required treatment time at the required low temperature to achieve the desired results.

On the other hand, both SculptSure and Trusculpt rely on reaching and sustaining a fairly high temperature to cause the death of fat cells.

However, both SculptSure and Trusculpt can be too hot and uncomfortable for the patient to sit through an entire treatment at the necessary temperatures required to achieve a fat cell death due to heat.

On the other hand, if you’re looking to build muscle and burn a little fat as a side effect it would advisable that you check out Emsculpt and high intensity focused electromagnetic energy technology results because this is also a completely painless procedure, it can feel a little odd and a little intense at times, but it is without pain, so you’re able to get through the whole thing and complete the necessary protocol, so in that sense, it’s similar to CoolSculpting because you’re going to be able to get through the treatment.